What Is Endometrial Cancer?


Cancer occurs when cells in the body begin changing and multiplying out of control. These cells can form lumps of tissue called tumors. Cancer that starts in the lining of the uterus is called endometrial cancer.

Understanding the Uterus and Endometrium 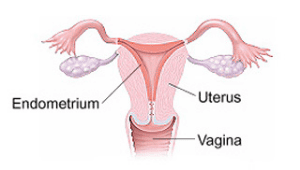 A woman's uterus is the organ that holds the baby when a woman is pregnant. The endometrium (inner lining of the uterus) plays an important role in reproduction. Each month, the endometrium grows and thickens to prepare for pregnancy. Women who aren't pregnant have monthly periods, during which the endometrium sheds and leaves the body in the form of menstrual blood. When a woman becomes pregnant, the endometrium helps to nourish the growing baby.

The endometrium is the most common place in the uterus for cancer to begin. Cancer can interfere with the working of the uterus and may invade nearby organs. Endometrial cancer may also spread to other parts of the body. This spread is called metastasis. The more cancer spreads, the harder it is to treat.

Treatment Options for Cancer of the Uterus

You and your healthcare provider will discuss a treatment plan that's best for your needs. Treatment options may include: